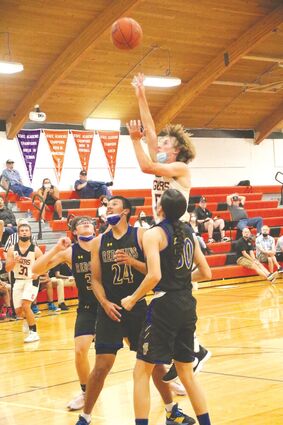 Sophomore Gage Starkel takes a shot in the final game against Wellprinit June 9.

On Tuesday, June 8, the Odessa Tiger boys defeated Wellpinit at home in Odessa by a score of 49-45. The next day, June 9, the Tigers traveled to Wellpinit for a return match, which they lost by two points, 46-44.

On June 10, an away game in Coulee City against Almira-Coulee-Hartline resulted in a 20-point loss, as the Warriors overpowered the Tiger team.

The Tigers' final game against in Springdale against Mary Walker High School was a 47-33 win.

The Tiger varsity won two and lost four in 1B Northeast District play.

In junior-varsity action, Odessa on its home court d...