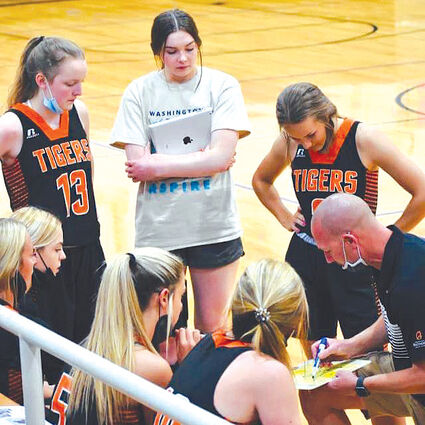 The girl's varsity basketball team won their final game of the season on Harrington's court by defeating the Panthers. Head coach Travis Schuh shows the team what he wants done.

SPOKANE – On Tuesday, June 15, the Odessa Tiger girls defeated the Valley Christian Panthers in Spokane. After a big first quarter, the Odessa team steadily outscored the Panthers to get the 52-21 win.

Maddie Scrupps led the Tiger team offense with 17 points, and Ashlyn Neilsen added another 14. Kenzy Kuchenbuch led the defense by hauling in 11 rebounds. Neilsen had one blocked shot against VC.

On Wednesday, June 16, the Tigers faced a different Panther team in Harrington, getting the win 59-19. Neilsen scored 25 points to lead the...