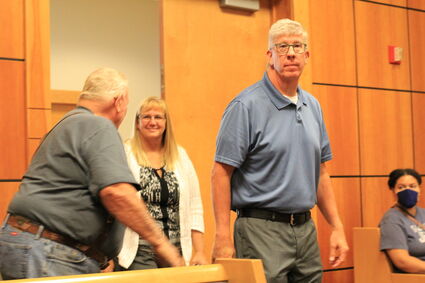 Wade Magers enters the Lincoln County District courtroom with his wife, Penny Magers ahead of his arraignment Wednesday.

DAVENPORT-Sheriff Wade Magers entered a not-guilty plea on all three criminal counts he's charged with at his arraignment Wednesday, July 7.

Magers is charged with obstructing a law enforcement officer, making a false or misleading statement to a public servant and rendering criminal assistance in the third degree.

The charges stem from a car crash involving Sheriff Magers' son back in February and the sheriff's alleged attempts to prevent authorities from learning that his son may have been driving under the influence of alcohol.

The arraignment was presided over by Garfield County D...