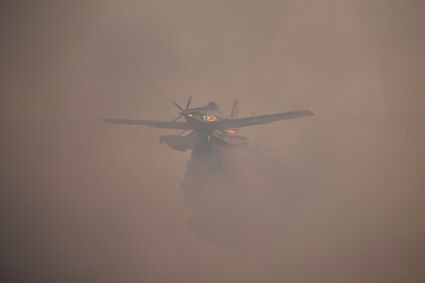 Terry Honyoust | Special to The Journal

Fishtrap Lake is a reservoir located about five miles north of Sprague in Lincoln County.

"I haven't gotten a morning update yet, but we had it knocked down pretty well under control," Lowry said early Monday morning, July 12, adding DNR and BLM crews mopped up overnight.

Lowry said he had seven trucks at the fire with at least two volunteers on each truck.

"I also had one truck that came up mutual aid, from Whitman County District 5, which is Lamont," Lowry said.

He said the last estimate he received on how much acreage the fire burned was 80 acres.

"It has not been confirmed yet; they have to take a GPS and walk the perimeter with it, but the last guess I had gotten from them, they were thinking it was around 80 acres."

"They didn't actually have definite witnesses, but it was started over by the shooting area, which always makes it suspect that it was caused by shooters," Lowry said. "But Burlington Northern also has a rail running through there, so it's also very possible it could have been started by a train."

"With as dry as we have been this year, our fire danger is earlier and higher than normal for this time of year," Lowry said.