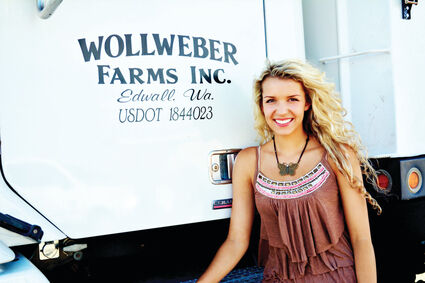 Mariah Wollweber, a fifth-generation wheat farmer from Edwall, was recently named the director of communication and partnerships for the National Association of Wheat Growers. Wollweber is a 2018 graduate of Eastern Washington University.

It certainly doesn't hurt, which is good news for the National Association of Wheat Growers (NAWG) as they welcome Mariah Wollweber, a fifth-generation Washington wheat grower, as their new director of communications and partnerships.

Wollweber grew up on her family's farm in Edwall, Wash., where she began helping her grandfather bale hay at age 8 and stepped up to driving a harvest truck at 13. She graduated from Eastern Washington University in 2018 with a degree in public relations and a minor in journalism.

For the past two years, Wollweber has been a public relations specialist for the Denver Regional Council of Governments. She credits her involvement with 4-H and an appearance on a Spokane TV morning show to talk about goats (she was showing goats at the time) as the things that sparked her interest in communications and agriculture.

"From a young age, I started falling in love with communications, and then my favorite thing I found to communicate about was agriculture," she explained. "I've worked really hard to understand politics. I was in Know Your Government for 4-H and was a state ambassador in 4-H. I spent a summer in D.C. when I was a sophomore in high school to learn about journalism and PR and how that plays in government. I've just basically focused on those two things my whole life. Coming to NAWG is a dream come true where I get to combine my two passions."

One of the reasons Wollweber is so passionate about representing farmers is because agriculture is a critical industry being performed by a small minority, and minorities are often easy to overlook. She pointed out that if lawmakers aren't hearing how their policies are affecting the agricultural industry, those policies could seriously hurt "the people who feed us."

In her new position, Wollweber handles all of NAWG's external and internal communications, as well as website and social media updates. She also oversees all the organization's partnerships with other companies and industry groups. She is still living in Denver but hopes to make the move to D.C. by the end of summer.

Wollweber's passion for talking about the ag community is also spurred by the disconnect she sees between farmers and the public. She feels a responsibility to help bridge that gap and believes that social media is an important educational tool and a way to talk about the farming industry with an urban population.

"Farmers are kind of at a disadvantage, being out in the middle of a field and not really having an opportunity to share their story," she said. "That's why organizations like NAWG are so important. They give farmers a voice and allow farmers to be heard. That really highlights how important organizations that focus on that communication and education side of things are."

While Washington state wheat growers may hold a special place in her heart, Wollweber is excited to learn how wheat is grown in other states and about the different issues wheat farmers across the nation face.

"It's so awesome to see how geographically diverse our board and our officers are, because they come from such different areas. When they give their updates, it's fascinating to hear the things their farmers are telling them, and the weather they are dealing with. To hear all those differences is incredible, and I love it," she said.

Wollweber said her direct connections back to an active farming community help her see firsthand how government policies and practices affect growers. She credits her agricultural upbringing for teaching her to work hard and giving her a drive to succeed in her education and career. She says that attitude is something she shares with other NAWG employees.

"I know NAWG has the farmers' backs, and so do I. It's who we care about, and who we want to be the voice for. We want to make sure our leaders in this nation are aware of our farmers and the challenges farmers are facing," she said. "I truly believe in the organization that I work for. I encourage farmers to talk with their states and their states to talk with NAWG, because NAWG really is the voice of the farmers and the lobbying arm for our wheat growers."