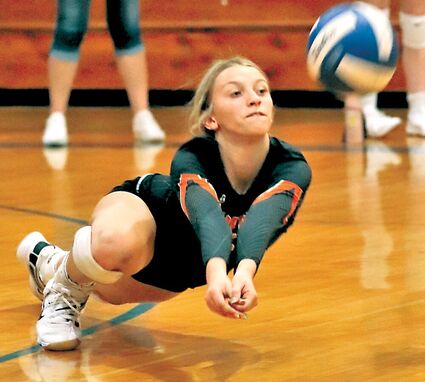 Photos by Roger Harnack | The Record

Ashlyn Neilsen digs the ball in Tuesday's loss to the Oakesdale Nighthawks. The Nighthawks defeated the Tigers, winning the match in three straight sets.

DAVENPORT – The Odessa Tiger varsity volleyball squad won the all-day tournament held in Davenport Saturday, Sept. 4. Throughout the day, the participating teams played each of the others in three-set matches rather than the usual five. The tournament provided an opportunity for the participating teams to get in some final practice before the season begins. After a few more non-league games, league play begins against Mary Walker High School in Springdale on Sept. 23.

Odessa first faced off against the Davenport Gorillas, capturing the first two sets to take the match.