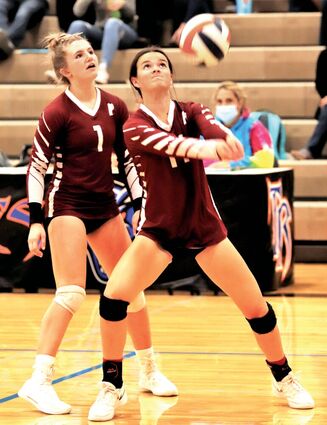 Reardan junior Emma Flaa bumps the ball as teammate Coalie Whitman looks on. Reardan knocked off Tekoa-Rosalia in the contest in straight sets.

Reardan won the first set 25-13, the second set 25-14 and the third set 25-12 in its convincing victory to improve to 3-1 and 0-1 in 2B play. Junior Coalie Whitman had eight assists and four aces for Reardan in the win, while senior Kendall Little had five kills and five blocks.

The second league match of the season was a loss for Reardan, however, as the undefeated Asotin Panthers won in four sets Tuesday, Sep...