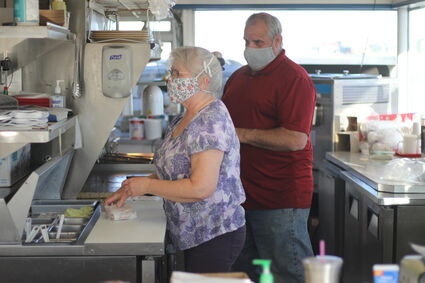 Mike and Virginia Fries prepare a hamburger order for a drive-thru customer at Edna's Drive-In Thursday, Oct. 7. The Fries have listed Edna's for sale and plan to retire when the business is sold.

DAVENPORT-Mike and Virginia Fries remember buying Edna's Drive-In in May 1992 not knowing when they'd re-open its doors after it was closed for 18 months following Edna Jackson's passing. They decided the highest customer demand would be during Pioneer Days, so they opened July 16, 1992.

That was a decision Virginia Fries remembers regretting, but now looks back at with a laugh.

"We were so swamped, and we hadn't practiced how we would work together," she said. "That was the most stressed I've been in my life."

In the 29 years of ownership since, the Fries have seen thousands and thousands...