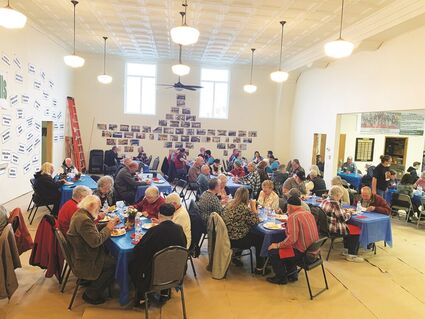 Terri King | Special to The Record

Members of the Odessa High School FBLA chapter who volunteered their time and effort to the rejuvenation effort at the Old Town Hall and a large contingent of who volunteered to help make the Odessa project a reality were celebrated at a luncheon held Oct. 22 in the mostly finished main room.

ODESSA – On Friday, Oct. 22, the many partners involved in the recent rejuvenation efforts at the Old Town Hall gathered together to celebrate the near completion of the downstairs area. Lowe's generously awarded $68,000 in the form of a Lowe's 100 Hometowns grant to renovate the Old Town Hall. The three Lowe's stores in the greater Spokane area donated additional items, including 10 light fixtures, a dishwasher, two new refrigerators, a microwave and a generator. Lowe's will also soon replace the doors in the south room. The event was also a "Red Vest" day, on which Lowe's employees volu...