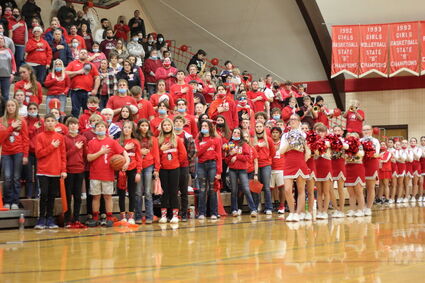 Davenport students and fans stand during the national anthem before the girls basketball game.

DAVENPORT — Winterfest between Davenport and Reardan was back this year, and the "Golden Plunger" prize's recipient came down to a rock-paper-scissors game during halftime of the boys basketball game Saturday, Dec. 11 before the host Gorillas were declared the winner.

The Winterfest competition between the two local high schools was to be decided through a points system based on five competitions: A food drive donation throughout the week, dress-up days at school, fan and students dressing up at the basketball games Saturday, a tug-of-war during the girls basketball game and a free-throw...