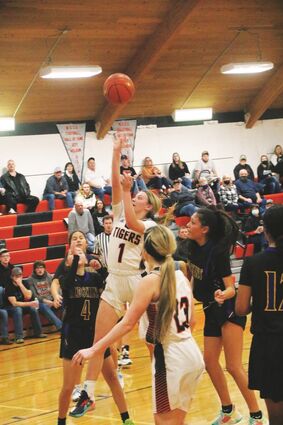 ODESSA – The Tiger girls got their season off to a winning start, defeating both Wellpinit and Valley Christian last weekend on Dec. 10 and 11. Ashlyn Neilsen was the leading scorer in both contests and was named Odessa Player of the Game for both.

Friday's home game initially looked like it was going to be a blowout, as Wellpinit had trouble finding the basket in the first quarter. Shots aplenty were made from all over the court but failed to drop through the net. By the fourth quarter, however, the Redskins were fully warmed up and had found their range. An injury to starter Grace Nelso...