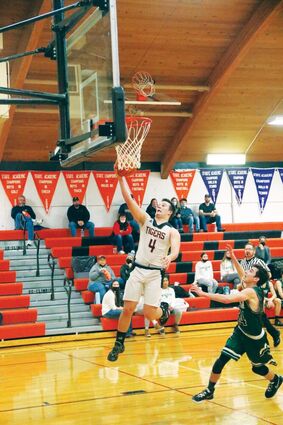 Jacob Scrupps is back in action, scoring well for the Tigers in the Dec. 22 win over the Selkirk Rangers.

ODESSA – Jacob Scrupps returned to the varsity lineup Tuesday and gave a much-needed boost to the team. Playing in Reardan against the Indians, the team lost the game but made a much better showing than in the other games played thus far.

In fact, Scrupps led the scoring for Odessa with 16 points, supported also by Nathan Carstensen's 11 points and Dakota Steward's 10. The Tigers took a beating in the first half and trailed 50-19 at the mid-point of the game.