Tiger girls lose one, win one 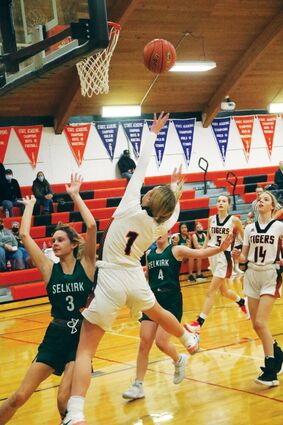 Ashlyn Neilsen remains the scoring leader for the Tiger girls, as frosh team members Lily Starkel (5) and Mackenzie Lutz (14) close in for a possible rebound against Selkirk last week.

ODESSA – The Odessa girls suffered their first loss this season to 2B school Reardan on Dec. 21. Fortunately for the Tigers it was a non-conference matchup. The Tigers are still undefeated in league play.

Ashlyn Neilsen scored 20 points, and Hayden Schuh scored 8 for the team's entire scoring effort. Neilsen scored more than half of her points from the free-throw line, where she was 12 out of 13 for a 92 percent success rate.

Neilsen also led the team in rebounds with seven. Hayden Schuh and Laela Hardung both fouled out late in the game.