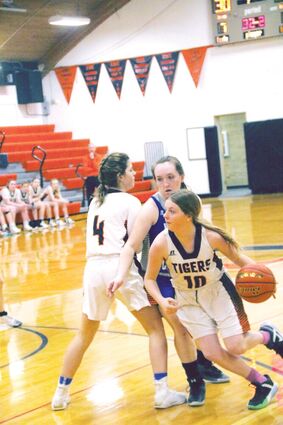 Eighth-graders Lexi Eden (#4) and Ashley Zagelow (#10) got in some playing time in the win over the VC Panthers on Feb. 1 at home in Odessa.

Tuesday's game against Valley Christian on Feb. 1 was a league win for the Tiger girls.

Ashlyn Neilsen was again the scoring leader with 23 points. She also had 10 steals and was named the Odessa player of the game.

Lily Starkel was the team leader in rebounds with five. Thanks to the lopsided score, every player on the bench got into the game.

On Feb. 2, the team traveled to Wellpinit and overcame the Redskins by a score of 54 to 49. Neilsen scored 26 points and was again named player of the game. Hayden Schuh added another 14 points.