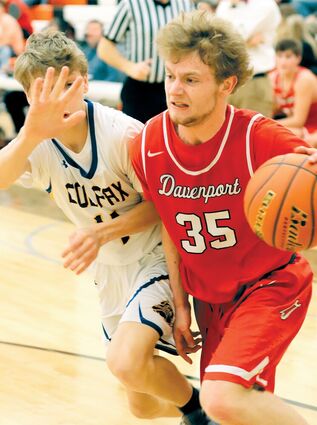 SPOKANE VALLEY-No. 2 Colfax never trailed in its 59-58 win over No. 3 Davenport in a District 7 semifinal matchup, but the Gorillas made it mighty close in the final minute Thursday, Feb. 15.

After leading by as many as 11 points throughout the game, Colfax found itself up by a point 58-57 with 1:25 left after a fierce Davenport comeback.

"We were able to isolate the ball who wanted it to get to on defense," Davenport head coach Matt Henry said. "And we were able to get rebounds when we needed (them."

Senior John Lustig got the ball inside and hit a shot while drawing contact to make it 6...