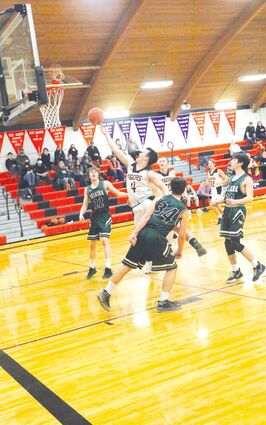 Jacob Scrupps (#4) scored 19 points in the Feb. 9 loss to Selkirk that eliminated the Odessa boys from further competition this season.

ODESSA – The Tiger boys ended their season last Friday night at home in Odessa. This was a loser-out game, so both the Selkirk and Odessa teams were playing with great intensity. After leading through most of regulation time, the Tigers were unable to hold off a late surge by the Rangers that tied the game at 54-54 as the buzzer sounded to end the fourth quarter. Three Tiger starters had fouled out by the end of the game, as had a couple of players from the opposing team. Flaring tempers also led to a technical foul being called on the Tigers after regulation time had ended. Selkirk went...