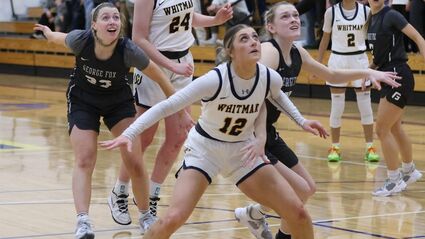 Whitman College senior Sydney Abbott (No. 12) goes for a rebound against George Fox University. Abbott and the Blues won the Northwest Conference title this year before falling in the second round of the NCAA Tournament.

WALLA WALLA-The Whitman College Blues' women's basketball team isn't a stranger to the Division III NCAA Tournament, but for Whitworth transfer and Davenport High School Class of 2018 graduate Sydney Abbott, making the postseason accomplished a goal that had been halted due to COVID-19 cancellations.

Abbott transferred to Whitman for the 2020-21 season as a junior, but the postseason was cancelled.

This year, the team lost one game in the regular season before an undefeated run through conference play secured WC's spot in the NCAA Tournament behind the strong play of All-American fifth-ye...