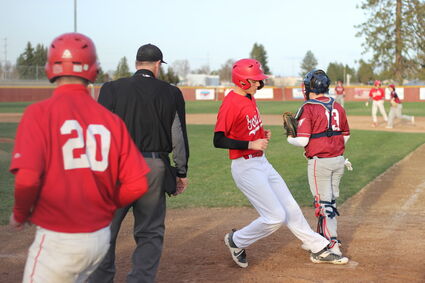 Senior Denton Deal of Davenport touches home plate and scores one of the Gorillas' 10 first-inning runs against the Medical Lake J.V. team Tuesday, March 29. Davenport earned a win over the Cardinals 19-9.

LINCOLN COUNTY-Baseball teams in Odessa, Reardan and Davenport went undefeated last week. The Tigers swept through Cusick and Newport, while the east county teams also got wins in their respective matches.

Reardan softball, meanwhile, lost two games while Davenport softball has yet to take the field this season.

Odessa picked up two convincing wins over Cusick Saturday, March 26. The first game was over in three innings after the Tigers scored 19 runs in the top of the third inning en route to a 26-2 victory. The second game was even shorter, with Odessa leading...