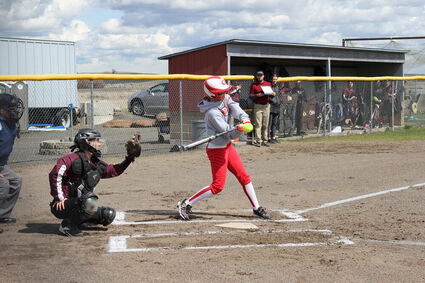 Davenport's Koda Coffman makes contact with the ball in the first inning of a 10-3 win over Reardan Tuesday, April 19.

REARDAN-A youthful Gorilla softball team was able to procure its first win of the season Tuesday before host Reardan bounced back to earn a victory in the second game of a doubleheader between the two Tuesday, April 19.

Davenport took care of business in the first game 10-3, with senior Kylee Buchanan earning the win on the mound.

Reardan then flipped the script in the second game for a convincing 16-3 victory.