Teams combined to go 1-3 against Colfax, 3-1 against LRS 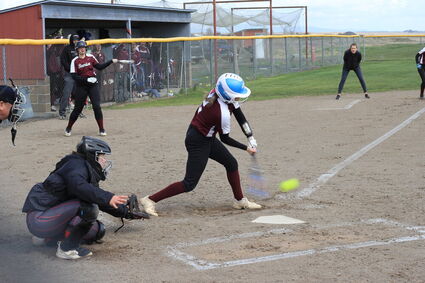 Reardan senior Alyssa Sosky hits a grounder in the bottom of the second inning of a 15-10 Reardan loss to Lind-Ritzville/Sprague Tuesday, April 26.

REARDAN-A full week of home games for the local baseball and softball teams against Colfax and Lind-Ritzville/Sprague led to mixed results.

When the Bulldogs came to town Friday, April 22, the top-10 ranked softball team wasn't messing around. Colfax beat Reardan 16-0 in three innings in the first game of a doubleheader, aided by 11 runs in the top of the second inning.

Reardan didn't have much better luck in the second game, but did get on the scoreboard. Colfax won the latter match 19-7 in four innings.

Colfax baseball topped Reardan 8-1 in the opening game of its doubleheader, but the...