Gorillas and Reardan head to sub-districts next 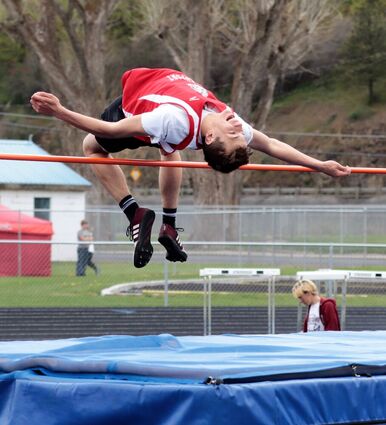 Davenport senior Jarrett Jacobsen clears the pole in the boys high jump Tuesday, May 3 at the league championship meet in Colfax. Jacobsen finished second in the event.

COLFAX-The Davenport boys track and field team got another win Tuesday. The Gorillas took care of their league opponents with a convincing victory at the NE2B League Championships with a score of 144 points, clearing second-place Chewelah (109 points).

The Davenport girls finished a distant second with 86 points. St. George's won for the girls with 138 points.

The Reardan boys finished in fourth place with 70.5 points, while the Reardan girls were also fourth with 70 points.

Davenport heads to Chewelah for the North divisional championships Tuesday, May 10, while Reardan will be in Ritzvi...