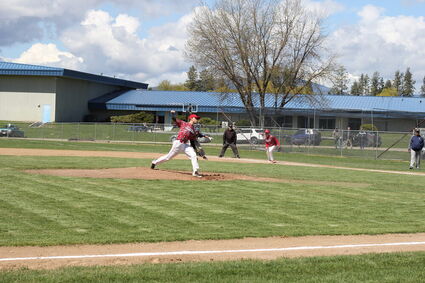 Davenport senior Denton Deal fires a fastball against Chewelah in the first round of the district playoffs Tuesday, May 10. Deal was the lone Gorilla to manage a hit against Cougars ace Zack Bowman in the loss.

CHEWELAH-Davenport couldn't hit Cougars ace Zack Bowman's 83 mph fastball, and as a result, the Gorillas were sent home in the first round of the NE2B District Tournament Tuesday, May 10.

The Gorillas were shut out by the top-seeded team in the league, the Chewelah Cougars, 11-0 in five innings.

Davenport managed one base runner in 16 plate appearances against Bowman, which came in the first inning on a single by senior Denton Deal.

Deal started strong from the mound, surrendering just one run to a strong Chewelah offense in the first inn...