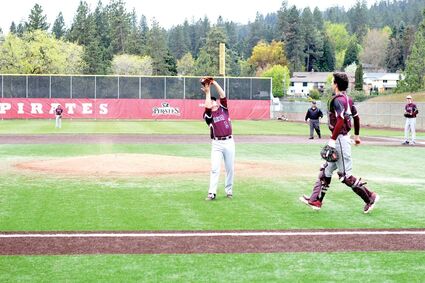 Reardan senior pitcher Caden Day puts away a pop fly in the top of the second inning against Colfax Saturday, May 14. Reardan fell to the state-bound Bulldogs 4-3.

SPOKANE – A three-run lead through two innings gave the Reardan baseball team sights on a state playoff bid, but four runs scored in the following six innings by the Colfax Bulldogs dashed those hopes. Colfax topped Reardan 4-3 in eight innings in a District 7 NE2B third-place game at Whitworth University to claim the league's final state 2B tournament bid Saturday, May 14.

Reardan quickly plated two runs in the bottom of the first inning on a sacrifice fly by Caden Day that scored Abe Nelson and a fielder's choice grounder by Tate Nelson that scored Tyler Clouse.