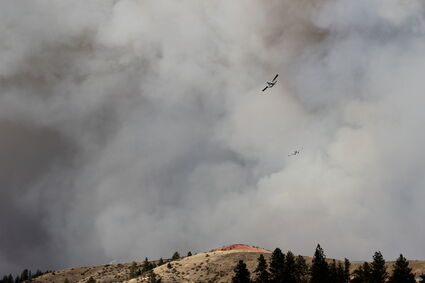 A strong air attack was utilized to counter the Seven Bays fire that broke out near Miles-Creston Road Sunday, Sept. 4.

SEVEN BAYS-A lot of brush and trees have charred, but no structures have burned in the Seven Bays Fire that broke out around 3:30 p.m. Sunday, Sept. 4.

News began to spread of a fast-moving fire near Miles-Creston Road soon thereafter. The fire began just northeast of Hawk Creek Campground, which was evacuated. It began to move northeast up a canyon and has burned over 1,000 acres of rangeland, stubble and forest land, according to a press release from the Department of Natural Resources.

Level 3 evacuations were ordered for residents in the areas of Mule Ranch Road, Reinbold Road and eas...