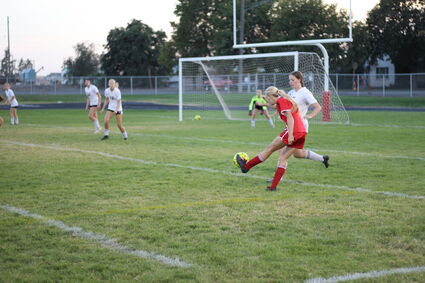 Davenport freshman Glenna Soliday tries to curve in a shot past the Reardan defense Tuesday. Soliday scored one goal and assisted on two goals in Davenport's 5-2 win over the Screaming Eagles Oct. 4.

DAVENPORT-The hometown Gorillas have responded to a pair of early league losses with three straight emphatic wins. The most recent of those came Tuesday against the rival Reardan Screaming Eagles, whom Davenport shot past 5-2 behind the efforts of several freshmen Oct. 4 in the first of two scheduled games in the rivalry series this season.

Davenport took a 1-0 lead four minutes into the match when freshman Sawyer Raugust followed a deflection into the net off a strong Gorilla attack. Sophomore Noelle Raczykowski tied it for Reardan six minutes later, weaving through the defense and curvin...