Lady Tigers come back against the Wildcats 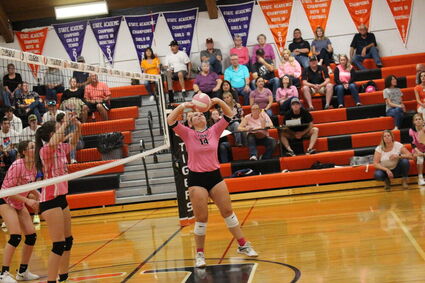 Kaytlyn Shafer sets up the ball during Odessa's match against Wilbur-Creston on Tuesday, Oct. 4.

ODESSA- The Lady Tigers won against the Wilbur-Creston-Keller Wildcats in a hard-fought, five-set, come-from-behind home match on Tuesday, Oct. 4.

The Tigers and Wildcats wore pink for breast cancer awareness.

The first set was a close call, with the Wildcats winning 25-23.

Both teams were highly competitive, and the ball spent more time in the air than on the ground.

Odessa returned with a narrow loss to the Wildcats in the second set with 25-20. .

The Lady Tigers stayed determined coming into the third set and won narrowly 25-23.

The match entered the fourth set with both teams and the cr...