Odessa wins after a challenge from Wellpinit 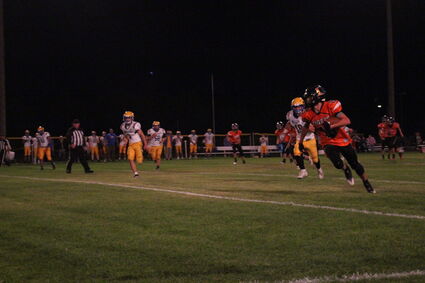 Corbyn Neilsen runs the ball against Wellpinit on Friday, Sept. 30. Odessa won with a score of 72-42.

ODESSA–The Tigers stayed perfect with a 72-42 win against the Wellpinit Redskins on Friday, Sept. 30.

Senior Collin Martin scored a touchdown with a successful two-point conversion within the first two minutes of the first quarter.

Wellpinit's defense tried to keep Odessa from running the field with them.

The Redskins briefly gained some ground in the first quarter with a touchdown without a successful two-point conversion.