Soliday goal gets Davenport past Reardan 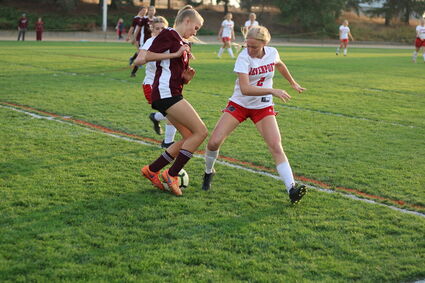 REARDAN–Top-notch defense was on display Oct. 20, as the soccer teams from Reardan and Davenport played to a scoreless tie until Gorillas' freshman Glenna Soliday drilled a ball into the Screaming Eagles' net with less than one minute to play in the game.

Davenport's offense spent much of the night at Reardan's end of the field. Its relentless attack kept Reardan goalkeeper Jaylee Abrahamson on her toes as she stopped shot after shot until Soliday's late game heroics.

"I saw the middle wide open and nobody came to pressure me, so I just

went for it," Soliday said.