Rainwater and Telecky missed on the court 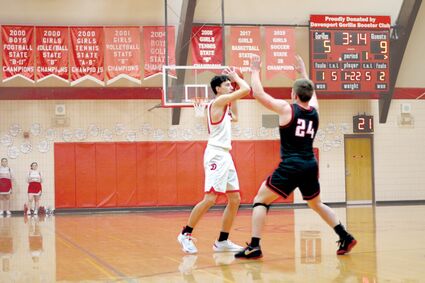 Davenport senior Brenick Soliday looks inside against the Liberty defense Tuesday, Jan. 3. Davenport suffered its first loss of the season 59-55.

DAVENPORT - They may have been missing their best player and a key bench contributor, but the Gorillas boys basketball team isn't making any excuses for their 59-55 shortfall to the defending state champion Liberty Lancers Tuesday, Jan. 3.

The loss was Davenport's first of the season after the Gorillas won their first nine games, all by double figures.

Davenport was missing its best player, Tennessee Rainwater, and a key bench contributor, Wyatt Telecky, both of whom were out due to illness. Those losses were felt in the first 14 minutes of the game, when Davenport struggled to get shots...