Tigers fall to Waterville and Oakesdale 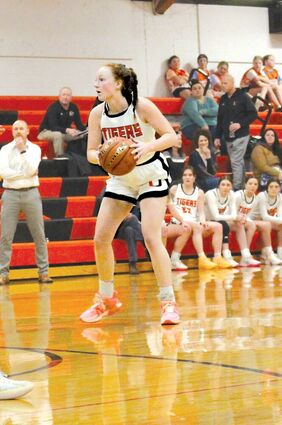 Hayden Schuh looks for a teammate to pass to during a non-league match against Oakesdale on Tuesday, Jan. 3.

ODESSA - The Tigers lost by 41 points, 58-17, during a non-league game against the Waterville Shockers on Friday, Dec. 30.

Waterville led after the first quarter 15-4, with Odessa's Hayden Schuh supplying all of the Tigers' points.

The second quarter started with a short back and forth between the two teams until Waterville scored ten more points, while Odessa scored only five more to trail 25-9 by halftime.