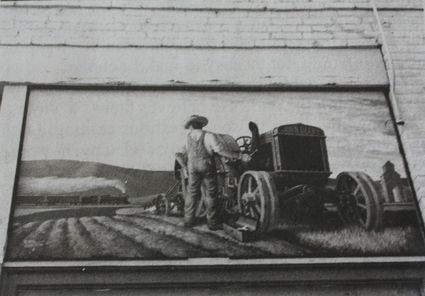 An early farming scene is depicted above and a Native American watching a wagon train of settlers arriving is depicted below in murals painted by Emil Knutson of Medford, Oregon that once decorated the exterior of The Odessa Record office.

The Odessa racquet wielders were again victorious in the return tournament at Lind Sunday. The weather was so hot that only six of the most enthusiastic local players ventures to make the 30 mile trip across the country with the mercury ranging near the 100 mark, but those that went were royally entertained by the Lind players and they report that this tournament was one of the best in which they ever participated.

This contest was scheduled to be an elimination match but lack of time p...