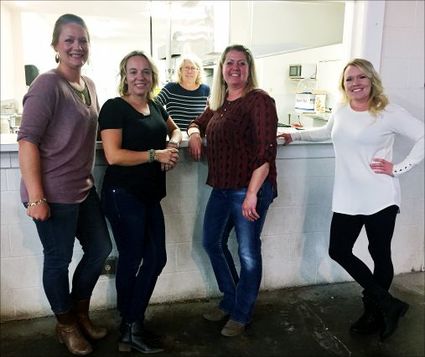 The community center was decorated in a black and white Tiger theme. Even the dessert bar, where community members outdid themselves baking and purchasing sports-themed desserts for attendees to enjoy followed the same theme.

The live and silent auctions did not fall short either. Odessa businesses and community members gave generously. The list of live auction items included the very popular Odessa Tiger-fan parking sign, a women's surprise basket from the Tiger football moms and seating at the 2019 head table. The most popular packages were the party boat for eight on Lake Roosevelt donated by Neil and Lecia Fink and the outdoor brick oven pizza party donated by Matt and Heather Messer and Rocky Coulee Brewing Company. The Carrie Underwood concert ticket package donated by Todd and Terri King and the Walla Walla wine-tasting package from Odessa Drug were also very popular. With more than 24 items available, the live auction brought in well over half of the profit for the night.

The silent and live-on-the-side auctions had a lot of great items as well. There was a great choice of clothing that the Booster Club had purchased, as well as signed sports gear from Tiger athletes and baked goods from Grannie BarBar. Due to the generosity of the community, the silent auction had a total of 81 items. The "Raise the Paddle for Scholarships" interlude, which took place in the middle of the live auction, raised $2200 for 2018-19 Tiger athletes.

Pre-sold tickets totaled 130, with an additional 18 sold at the door. The dinner included prime rib, cut to order, and cheesy potatoes prepared by Suzie Deife and the kitchen crew.

Overall, the event was down $4,000 from last year's auction, but with a late date change the board was nevertheless happy with the outcome. The club is looking forward to next year's auction, which is set for Saturday, October 26, 2019.