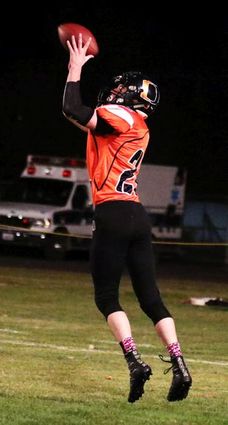 With grace and style, Brady Walter makes receiving the ball look easy in the game against Yakama Nation Friday, October 26.

The eagle eye of the Yakama Nation Eagles wasn't enough to spot the attack of the Odessa Tigers on Friday October 26 at Finney Field in Odessa. The OHS Tigers annihilated the Eagles, winning the game 95 to 6.

The high score was definitely a result of some team work. Camden Weber, Jett Nelson, Lane Lobe, Brady Walter, Marcus King, Jakob Starkel, Theron Schlomer, Josh Clark, Jordyn Cooper and Tim DeWulf all made it on the scoreboard this week.The high scores this streak has had all season have been mind-blowing, with scores you would usually see in a basketball game. 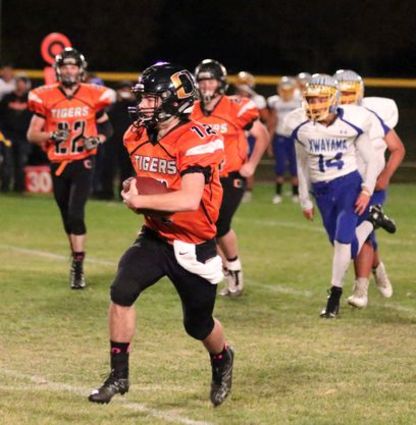 Camden Weber runs with the ball followed closely by Lane Lobe (22) and Jaden Hunt (24) in Friday's game against Yakama Nation.

The Tigers did an outstanding job holding the Eagles back in this game. The total number of tackles for the game was 34. Once more it was definitely a night when the team worked its magic together. Keith Strebeck, Lane Lobe, Brady Walter, Marcus King, Jakob Starkel, Theron Schlomer, Josh Clark, Pilot Weishaar, Jordyn Cooper and Tim DeWulf all participated in the tackling game, with Lane Lobe, Marcus King, Jakob Starkel and Jordyn Cooper each getting sacks.

This Friday, the OHS Tigers will be playing Tekoa/Rosalia at Finney Field at 7 p.m. It would be wonderful to see all of Odessa in the stands, showing this superior streak of young Tigers that you support them at this crossover game. Let the Timberwolves hear how loud Odessa can roar in the stands.