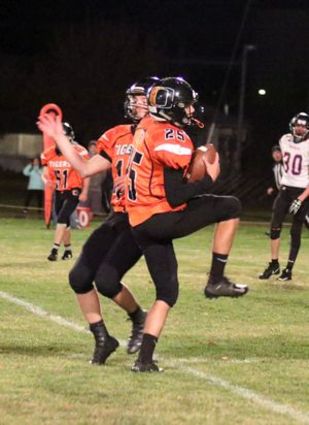 Josh Clark (44) and Brady Walter (25) seem to have all the right moves in Friday's game against Tekoe/Rosalia.

OHS Tigers triumphed over the Tekoa/Rosalia Timberwolves Friday, November 2, at Finney Field in Odessa. The final score of the night was 80 – 6, but the Tigers held the whip through the entire game, not letting the Timberwolves score until the fourth quarter.

Camden Weber had another great passing game with 178 yards. He completed seven out of 10 attempted passes. Total rushing yards for the game was 287, with Marcus King leading with 133 total, followed closely behind by Josh Clark with 83.

The defensive line was definitely doing their part with a total of 41 tackles in the game. Leading the team in tackles was Josh Clark with five solo take-downs and four assists. Right behind Clark were Brady Walter and Marcus King, both having a total of six tackles.

This team has reached new heights on the scoreboard this year. Josh Clark leads the streak in this game with a total of 24, followed closely by Marcus King with 22 points. Brady Walter had 12 and Jakob Starkel had 10 points in the game. 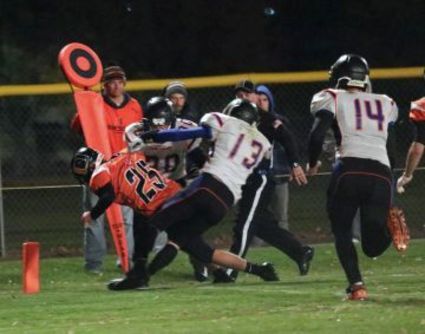 It takes more than one Timberwolf to take a Walter (25) down as Brady heads for the end zone.

According to my sources the OHS Tigers had possession for 12 minutes while the Timberwolves had it for a total of 36. I am just a girl and to me that seems backwards, but the Tigers are a fantastic team and I think that if any team could do it with so little possession time, they could.

I'm going to tell you a small secret about myself. I've never played the game. I haven't even really paid much attention to football, since the Tigers played in the Kibby Dome when I was in school. I started on this newspaper and was quickly made a HUGE fan of this team. I really hope that, if they make it all the way, I can be right there with them, as this Streak of Tigers has become a huge part of my life. I am so proud of them and how hard they have worked all season. My hope is that all of this work pays off. I want to see them win at State. I hope that by following my articles, you do too.