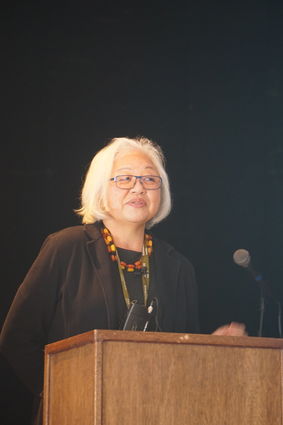 The Harrington City Council met at 7:30 p.m. Nov 14, with the following present: Mayor Justin Slack, councilmen Peter Davenport, Michael Cronrath, Nathan Luck, Levi Schenk and Tim Tipton, clerk Bunny Haugan, maintenance man Scott McGowan and visitors Jess Silhan, Turner Slack, Marge Womach and Cherie MacClellan. Following the approval of minutes and bills to be paid, the mayor opened a public hearing on the Preliminary Budget for 2019 at 7:43. Discussion ensued until 9:24, at which time the budget hearing was closed, and the mayor opened a public hearing on Levy Certification. Resolution No. 211-2018 was read and the second public hearing was closed.

The mayor's preparedness was as refreshing as was his transparency in sharing with the council the work that went into the Preliminary Budget. He praised the clerk for her dedication to the city and for her willingness to teach him as he learned a new process. He brought a well-organized budget showing precise entries recording the transfer of money from one area to another. He engaged the council members to follow him through the forms as he made explanations. He praised former Mayor Paul Gilliland, current city treasurer, for his knowledge and assistance with the budget. Decisions will need to be made by the council before the budget can be fine-tuned. The council needs to determine if there is still a need for maintaining the pay phone outside city hall, which costs the city about $650 per year. Unmetered properties need to be metered, regardless of the owner. The council needs to decide if it wants to put money into a new lawn mower or if it would prefer contracting the work to a lawn mower service. This would also eliminate the need for the extra summer help primarily used for the cemetery. The city needs to have all the pipes for water and sewer on digitized maps; this expense needs to be calculated. Council members need to be aware that if the old Mack fire truck is sold, the city will have another empty building to use, sell or lease.

The chicken ordinance is again alive and being bantered from Schenk to the council, and now on to the city attorney to be written in legal language which would allow the council to vote to accept or reject the issue of chickens being allowed in the city limits.

The Pine and The Cherry

Sunday afternoon at 2 p.m. a group of about 40 assembled to hear Mayumi Tsutakawa present "The Pine and The Cherry," a part of Humanities Washington's Speakers Bureau program. Billie Herron opened the afternoon session by describing Tsutakawa as an independent writer and curator who has focused on Asian/Pacific American history. She received her master's degree in communications and her bachelor's degree in East Asian studies at the University of Washington. Her graduate thesis is one of the few documents to research pre-war Japanese/American newspapers. "This event is sponsored by Humanities Washington, a non-profit organization dedicated to sparking conversation and critical thinking, and it provides many other cultural programs to hundreds of thousands of people throughout Washington each year. Thanks to support from the National Endowment for the Humanities, the Boeing Company, the Washington Secretary of State and many private donors, Humanities Washington Speakers Bureau presenters visit all corners of the state."

Mayumi Tsutakawa of Seattle began to engage the audience with a few brief comments and stirring questions, followed by a few words in Japanese and a kind interpretation of the same: "How Are You?" and "Good day." She defined "Pine" as longevity and youth and "Cherry" as spring and renewal. She interspersed personal details while building the larger, complex story of her family and their relatives in pre-war and post-war situations. She personally was born in the United States, raised in Japan, and returned to the U.S., much like many of her relatives, since her Dad was born in Seattle in 1910, sent to Japan to be raised for seven years, and then disowned by his family as he wanted to be an artist, which was not what his parents had planned for him. Her Dad joined the U.S. Army, was an interpreter and obtained a college degree. He did not suffer the fate of many of their friends and relatives.

Early Japanese immigrants came to work on railroads, in the fishing industry, in the lumber market and as contractors. Women did not tend to come, but eventually became "picture brides." An international district in Seattle became known as Japan town. In 1900, six Japanese owned hotels, by 1930 they owned 125 hotels and in 1940 it was about 7,000 while they were only two percent of the population. The Japanese were a highly literate community. The older Japanese tended to be Buddhist while many of the younger ones were attending Christian churches. Prior to 1922, the Japanese could purchase property, but a Washington state law in 1921 prevented the Japanese from buying land or entering into a three year lease. In 1922, federal law stated that the Japanese could no longer own property. Over a period of time the Japanese became severely restricted and were restricted in their fishing licenses and prevented from interracial marriages.

Following Imperial Japan's attack on Pearl Harbor in 1941, 120,000 people were rounded up, half of them children and U.S. citizens. Tsutakawa showed before-and-after photos of the Seattle business district called Japan town. Following Pearl Harbor, the Japanese stores were boarded up, leaving an appearance of desertion. When the people were rounded up and taken to encampments, the children were given tags on their jackets, and each was allowed "one suitcase only." Some were carried off to the Puyallup Fairgrounds for months, only to later be shipped to Camp Minidoka, in Idaho, all in accord with Executive Order 9066. "They were arrested without charges," Tsutakawa stated, and one could hear the pain and disgust in her voice. An imaginary line had been drawn through the Yakima area, running north and south, and those that were west of the line were rounded up and those east of the line were left alone. There were some fine Japanese gardens in Tacoma and Wapato. Some politicians befriended a few of the owners while others lost everything and were sent to encampments. Any Japanese who held a leadership position in their communities was arrested without charge and sent to remote camps in the central U.S. It is estimated that about 17,000 were so offended.

She concluded her program with a question-and-answer session in which she received numerous questions which denoted how attentive the audience had been to her presentation. An "Audience Evaluation Form" was provided by Humanities Washington with the following items: 1. I learned something from today's presentation, 2. I considered a new idea or perspective as a result of this presentation, 3. This presentation sparked meaningful conversation, 4. How did you hear about today's event? The first three questions were to be answered by ratings of "strongly disagree" to "strongly agree."

Of these families it was known locally that Mrs. Joe Kinoshita's sister and her husband, Mr. and Mrs. Fred Okazaki, died at Manganore, Calif., a "relocation" center for California Japanese. The local Harrington paper reported, "Mr. Okazaki, 42 years old, came to the States in 1918. Evidently depressed by world conditions, Mr. Okazaki took his wife's life and then his own. The two little daughters, four and six years old, are left with no relatives nearby, and the Harrington relatives have been contacted to help decide about their future. Mr. Okazaki was an uncle of the Tagami boys, Tokeo and Takegi, making the two little orphaned girls their cousins, as well as nieces of Mrs. Joe Kinoshita's." (Citizen: 10-02-1942) 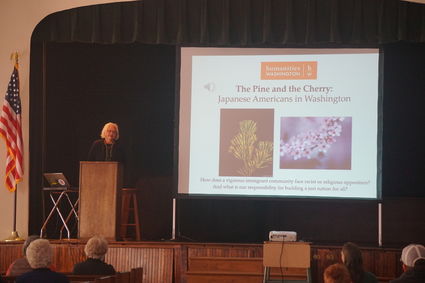 Mayumi Tsutakawa presents The Pine and The Cherry at the Harrington Opera House Saturday. The program is a part of Humanities Washington, a non-profit organization dedicated to sparking conversation and critical thinking.

Much like Mayumi Tsutakawa's father, George, who served in the military, Harrington's Tommy Kubota served during WW II. He was attributed the distinction of serving with the famed 442 Regimental Combat Team and participated in numerous battles, including the Battle of the Bulge and the Lost Battalion Rescue.