Tigers to championship game in Tacoma 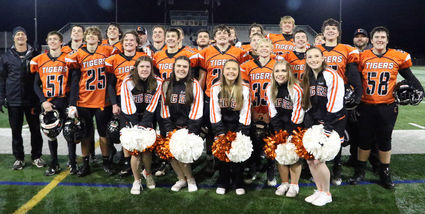 The Odessa Tiger football team, coaches and cheer squad will travel to Tacoma this week to prepare for Saturday's championship game against Almira-Coulee-Hartline. The game in the Tacoma Dome begins at 4 p.m.

The OHS Tigers obliterated the Quilcene Rangers on Saturday afternoon, November 24, at the Wenatchee Apple Bowl. This lady knew that they could get the job done after I looked at the stats and discovered that the Tigers have outscored the Rangers this season 866 to 88.

The Tigers took the Apple Bowl game by a score of 65 to 6, with Marcus King walking away with the Sportsmanship Medallion in this semi-final playoff game. Within the first 58 seconds of the game, King had taken the ball 33 yards for a touchdown. But it only took the Rangers a little bit of time to counter with a 48-yard pass and their own first touchdown.

The Rangers were really no match for the OHS Tiger streak, though, as the Tigers dominated the rest of the game, starting within seconds of getting the ball back, as King took it 93 yards for the next Odessa touchdown. Tim DeWulf and Pilot Weishaar also kept the lights on the scoreboard changing, making the score 59 to 6 by halftime.

The Tigers now advance to the Tacoma Dome on Saturday, December 1, to play against league rivals Almira-Coulee-Hartline.

This championship game will be a NE 1B South League showdown. IT'S TIME FOR A CARAVAN!! Decorate your car, grab your pom-poms, put on your orange and black and head on over to the Tacoma Dome and show them the pride that Odessa has in their team.