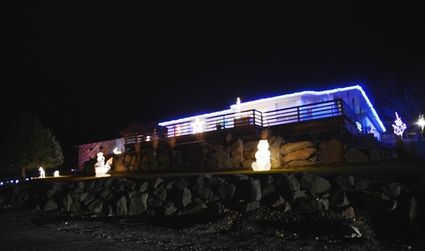 The home of Sam and Donna Mullens is all lit up for the holidays. Their elaborate display of lights and holiday figures resulted in a first-place award from the Odessa Lions Club. Each year, a committee of club members awards first- and second-place prizes to the folks whose displays please them the most based on criteria established by the club at large.

Sam and Donna Mullens took first place in the 2018 Christmas lighting contest sponsored by the Odessa Lions Club. Their house and yard (front and back) on Sixth Avenue were filled with lights and figures that must have taken quite some time to install.

The town looked very festive this Christmas season, with many homes decorated with lights and various types of displays. It is always a treat to drive around Odessa during the holidays and see the artistic endeavors of our fellow citizens. The early darkness that falls during December and January is mitigated somewhat by the bright lights of holiday decorations.

To our readers who missed their Odessa Record last week (that would be all of you), our apologies for having had to cancel our final issue of 2018. We have combined much of what would have been published then into this issue. We were also touched by the many expressions of concern, both online and in person, about our staff members who were laid low by the common winter bugs that were racing through the population of Odessa. Nothing serious was reported, and everyone here is now healthy again and back to work, bringing you local news from Odessa, Harrington, Marlin, Lamona and Mohler.