OHS Tiger boys 8 and 0 as the wins keep coming 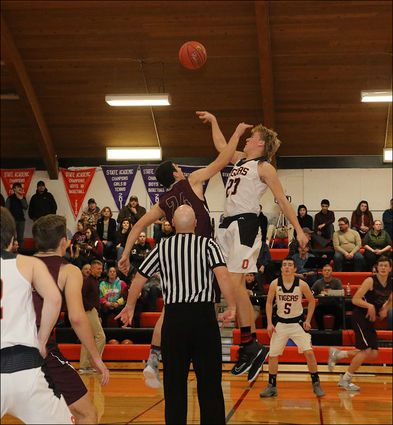 OHS Tigers pounced on the Valley Christian Panthers, winning the game by a score of 68 to14.

Ryan Moffet seemed to have luck and skill on his side, again leading the team in points with a total of 30. Tim DeWulf had a total of 9 points, followed closely by Marcus King with 8, Camden Weber with 7 and Jett Nelson with 6.

The Tigers had an amazing 33 rebounds on the game, which kept that ball heading in the right direction. Combine that with the assists, and you come up with a 68 to 14 win.

On December 21 the OHS Tigers brought the Reardan Indians to their knees. The Tigers defeated the Indians 59 to 36.

Top scorers in the game for the Tigers were Moffet with 29 points, DeWulf with 10 points, Weber with 9, King 7 and Nelson and Lane Lobe 2 each.

The Tigers had a total of 24 rebounds, 15 assists, 8 steals and 4 turnovers. Keeping the ball in Tiger hands made for another win.

On December 27 the OHS Tigers played the Chewelah Cougars in the Kettle Falls Tournament and once more proved that the Tigers are the dominant species, overthrowing the Cougars 74 to 54. This brought the Tigers to 6 and 0 for the season.

Once again, the omnipotent Moffet led in scoring for the Tigers with a total of 42 points. Weber and DeWulf had 10 points each, followed by Jaden Hunt with 8 and King with 4.

Helping to keep the ball in the Tigers' hands, the boys had a total of 26 rebounds. King lead in rebounds with 8, followed by DeWulf with 7, Hunt with 6, Weber and Moffet with 2 and Lobe with 1. 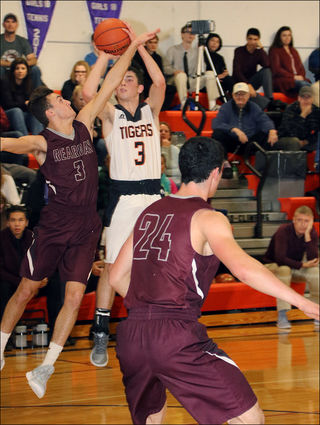 Our own personal heroes Superman and the Hulk, aka Moffet and King, led the team in scoring this game. Moffet had 25 points and King had 14. Nelson and DeWulf followed with 6 points each and Weber and Hunt each had 2.

There were a total of 38 rebounds, 10 assists and 17 steals in the game. Like Thor hanging on to his Mjölnir for power, the Tigers kept a tight hold on the ball throughout the entire game. The Tigers are now 8 and 0 on the season.

This streak of Tigers is on one heck of a winning streak. Here is to a winning season that we can all enjoy.

The next game will be January 4 in Odessa at 7:30 p.m. against Northport. So put on your orange and black and head over to the gym and cheer on the Tigers to another win.