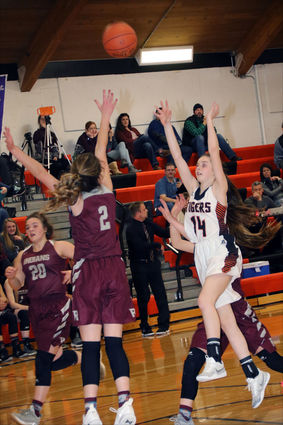 OHS Tigers girls succumb to the agility of the Valley Christian Panthers, losing 38 to 54.

It was definitely a great effort on the part of the Tigers. Top scorers in the game were Caitlyn Schuh with 10, Kenadie Elder with 8, McKennah Davison with 8, Grace Nelson with 7 and Brenna Carstensen with 5.

The lady Tigers had a total of 27 rebounds, 11 assists and 10 steals on the game. Unfortunately, it just wasn't quite enough to keep the Panthers from winning the game.

The next game was against the Reardan Indians. Once again it was a close one, but unfortunately the lady Tigers were just short of the win. The final score was 32 to 25.

Maddy Wagner was the high scorer for the Tigers with 7 points, followed by Schuh with 5, Davison with 4, Carstensen and Emily Scrupps both with 3.

The Tigers had a total of 34 rebounds and 12 steals on the game, but with 22 turnovers it just wasn't enough for the win.

On December 27, the OHS Tigers played the Chewelah Cougars to kick off the Kettle Falls Tournament. The Cougars pounced on the Tigers with a score of 44 to 30.

Top scorers in the game for the Tigers were Davison with 10 points, Wagner with 8, Schuh with 6 and Elder, Carstensen and Nelson each with 2 points.

The ladies had a total of 23 rebounds, 8 assists and 12 steals on the game. The girls worked hard to keep the ball in the Tigers' hands, but unfortunately the Cougars were able to defeat the OHS Tigers. 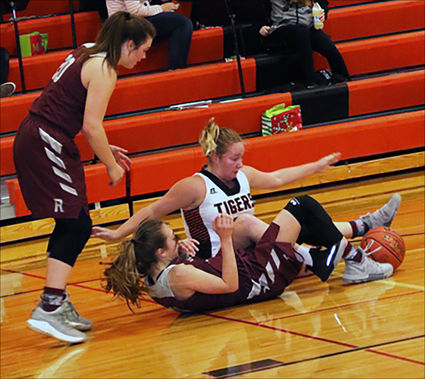 The final game of the Kettle Falls tournament was against Kettle Falls on December 28. The Bulldogs pulled out the win with a score of 43 to 30.

Top scorers on the game were Wagner with 13 points, Schuh with 5, Ashlyn Neilsen and Davison each with 3 and Elder, Carstensen and Nelson each with 2 points. The Tigers made only 8 out of 45 goal attempts.

There were a total of 32 rebounds, 4 assists and 9 steals on the game. Lamentably, with 27 turnovers, the Tigers just couldn't make up the difference and were overpowered by the Bulldogs.

The next game for the OHS girls is against Northport here in Odessa on January 4 at 6 p.m. So head on over to the gym and show the girls that you support them.