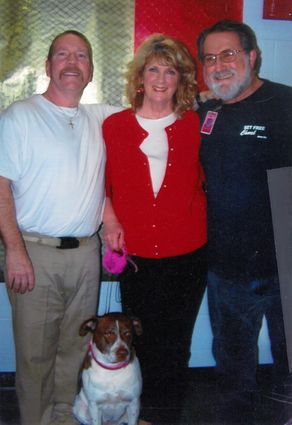 Doug G., left, an inmate at Clallam Bay Corrections Center, with Margie and Michael Sgobba of the House of Hope Ministries, a non-profit, charitable 501(c)3 corporation now based in Odessa. The dog is a shelter dog being trained by Doug.

Now that our sometime columnist Vivianne Poe has become busy with other pursuits and has less time to devote to our Meet Your Neighbors articles, we will try to fill the gap until she finds more time on her hands.

We are grateful to Nate Lathrop for introducing us to one of the newer couples in Odessa, Michael and Margie Sgobba. Vivianne Poe met them when they first moved to Odessa from Bremerton in July of 2018, but scheduling interviews with them last fall proved difficult. Busy lives led to several canceled interviews. Somehow, the time never seemed right.

The Sgobbas moved to Odessa from Bremerton, where Michael had lived for 30 years. Originally from San Diego, he decided to attend Bible College there rather than follow his father into a career in law enforcement. He met the former Margie Van Wyck in Odessa, and they were married about 11 years ago. In Bremerton, they continued the work that Michael had begun there, ministering to inmates of jails and prisons and working with inmates reintegrating back into society after having served their sentences.

Now the Sgobbas are working to establish the House of Hope East. Pastor Michael has already begun ministering to inmates of the Lincoln County Jail in Davenport. He also hopes to soon be active also at the Grant County Jail in Ephrata.

Another aspect of their ministry has been to get inmates involved in preparing dogs that have been abused or abandoned for adoption into steady and reliable homes. Airway Heights Corrections Center is one such facility that is nearby. The Clallam Bay Corrections Center is another located on the west side of the Cascades (on the Olympic Peninsula. The Spokane Humane Society supplies the dogs that the inmates at AHCC prepare for adoption into forever homes.

Nate Lathrop has been working with the Sgobbas on an event to be held in downtown Odessa on Saturday, July 27, the 2019 Christian Rock Freedom Fest. The event this summer will be held in the empty lot across the street from Rolling Thunder Pizza, with participating Christian rock bands from throughout the area. More information on this event will be provided as the event date draws nearer.