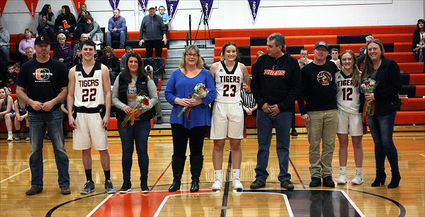 The seniors and parents recognized for senior night were Landon, Lane and Deanna Lobe, Chris, Kassidy and Bill Crossley, along with H.P., Brenna and Cory Carstensen.

Tuesday January 22 the OHS Tigers brawled with the Columbia Lions of Hunters. The Lions were pummeled by the Tigers 66 to 24.

Ryan Moffet ingeminated what he has done throughout the season, being the high scorer once again with 18 points. Jaden Hunt was next in line with 10 points, followed by Jett Nelson and Daeton Deife with 8, Camden Weber with 7, Lane Lobe with 6, Tim DeWulf with 5 and Eric Johnston with 4.

The Tigers had a total of 35 rebounds in the game, 15 assists and 14 steals. Even with 15 turnovers they still were able to annihilate the Lions.

January 25 the Tigers had a home game against the Selkirk Rangers. The Rangers were no match for "The machine" and the rest of the Tiger team. The Tigers mauled the Rangers 72 to 39.

I could go on and on about the high scorers, but it all looks like I am just copying my last report. It's the teamwork that these boys exhibit that gets it all done. I mean, seriously, 42 rebounds, 16 assists and 14 steals. It makes it hard for anyone to be able to beat the Tigers, because they all work so well together. You would think that these boys grew up playing ball together.

You can definitely tell that the coaches have been putting in overtime helping these boys get to where they are. Of course, I have always thought of the Tigers as an outstanding team. I'm not prejudice at all, since I was in school watching them play back in the 80s. 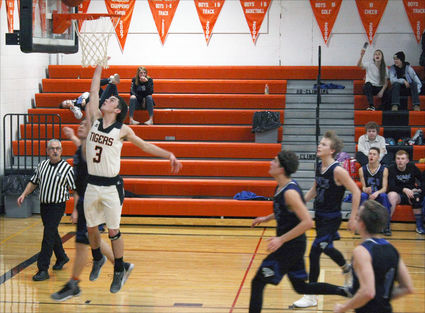 Camden Weber dances on air as he makes a lay-up against Selkirk last Friday.

All right, enough babbling. On January 26, the Tigers had another home game with the Valley Christian Panthers. The Tigers did their thing, kicking butt, 87 to 35.

These boys amaze me all of the time with their shooting ability. Ryan Moffet had 27 points, Camden Weber 18, Marcus King 10, Jett Nelson and Jaden Hunt each with 8, Tim DeWulf with 6, Eric Johnston with 4, Lane Lobe with 3 and Drew Hardung with 2. Just like I said before, it is an outstanding team effort that gets the job done.

You combine their outstanding shots with the ability to rebound and steal the ball, and this team is almost as invincible as Superman. As long as they keep up the outstanding teamwork, they will blow through the district tournament like a hurricane.

The next game is against Wilbur/Creston in Wilbur on February 2 at 6 p.m. So head on out to Wilbur and cheer on this amazing team.