Tiger girls are one and two again this week 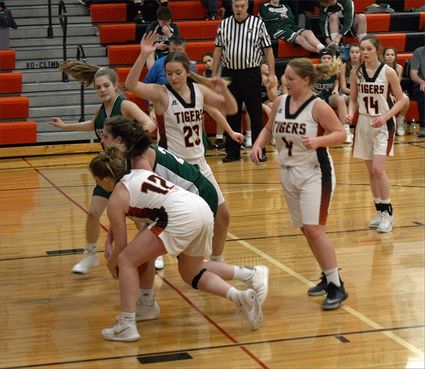 Caitlyn Schuh (4), Grace Nelson (14) and Kassidy Crossley (23) watch as Brenna Carstensen (12) takes on a Selkirk player in a fight for the ball.

On January 22 the OHS Lady Tigers fought valiantly and won their battle against the Columbia Lions. They won the game with a score of 65 to 14 in Columbia.

High scorer in the game was McKennah Davison with 17 points. The Tigers were able to win, though, due to a fantastic TEAM effort. Maddy Wagner had 12 points, Brenna Carstensen had 10, Emily Scrupps and Caitlyn Schuh each had 9, Kenadie Elder had 4 and Naomi Smith and Katreace Boss each had 4.

The Tigers had a total of 23 rebounds in the game, with 6 assists and 25 steals. All of that teamwork made it too difficult for the Lions to keep up.

January 25 the Lady Tigers played against the Selkirk Rangers in Odessa. Unfortunately the home court advantage wasn't quite enough to make it happen for the girls and they lost the game 36 to 34.

McKennah Davison was the high scorer in the game with 19 points. She was followed by Caitlyn Schuh with 5, Ashlyn Neilsen and Maddy Wagner each with 4 and Kenadie Elder with 2 points.

The Tigers had a total of 39 rebounds, 3 assists and 15 steals. I think that the personal fouls may have hurt just a little bit with a total of 23 in the game.

On January 26 the lady Tigers fought against the Valley Christian Panthers in Odessa. The girls fought hard, but didn't quite make it, losing to the Panthers 50 to 25.

McKennah Davison was the high scorer once again with 10 points. She was followed by Kenadie Elder with 8 points, Caitlyn Schuh and Ashlyn Neilsen with 3 points each and Maddy Wagner with 1 point.

The Tigers had a total of 36 rebounds, 5 assists and 8 steals. Unfortunately, there were 29 turnovers and they weren't able to recover from the loss of the ball.

The Lady Tigers next game is against Wilbur/creston in Wilbur on February 2 at 4:30 p.m. If it goes like the past few away games, the Tigers should do pretty well. So head on over to Wilbur and cheer on the Tigers for a win.