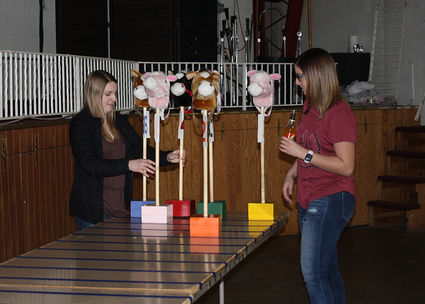 Hannah Schmidt, left, and Paige Alloway line up stick horses on a track to get them ready for horse racing at the Crab Feed Saturday in the Community Center.

The Odessa Lions Club held its Crab Feed fundraiser last Friday night in the Odessa Community Center, where folks began arriving even before the 6 p.m. start of happy hour. As the early birds spent their time in serious attempts at achieving an "attitude adjustment" after a busy work week, Lions Club members were tending bar, setting up the buffet table, cooking the prime rib for those in the non-seafood group and organizing the Horse Race table.

The usual side dishes were provided in addition to the one and a half Dungeness crabs or thick slices of prime rib served up to the hungry crowd. Buttered French bread, potato salad, baked beans and several varieties of condiments graced the table, and both chocolate and vanilla cake were on hand for dessert.

Club member Ted Bruya once again emceed the horse races that had been added to the event in recent years. Six stand-up hobby horses were placed in six lanes drawn onto a paper covering on top of one of the rectangular tables. Bruya then circulated throughout the room with a dice cup containing three dice. After emptying the dice onto one of the dining tables, he called out the number of dots on each of the dice, where each number corresponded to a lane on the race course. Each time the number "three" was called, for example, the horse in lane three would be moved forward one increment in its lane. Hannah Schmidt and Paige Alloway were responsible for moving the horses within their lanes.

The money raised at this event is used by the club for its various projects throughout the years, which have included the design and construction of the outdoor stage, the construction and updating of the covered barbecue area at Reiman Park, among others.