In a fourth rematch, Tiger boys fall to ACH

By DYANNE DEERING and TERRIE SCHMIDT-CROSBY 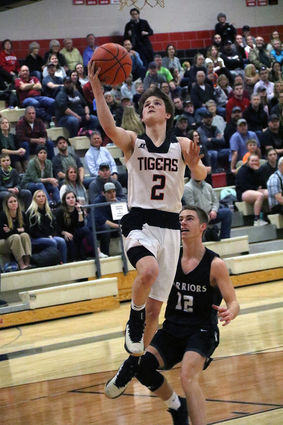 Ryan "The Machine" Moffet could be the poster child for a textbook perfect layup.

The OHS Tigers battled the ACH Warriors last Friday in Cheney. The fight was a hard one. The Tigers led by five at half time, but the Warriors managed to overtake them during the final three minutes of the game. Final score: 60 to 52.

Ryan "The Machine" Moffet led the Tigers in scoring once again with a total of 26 points. Marcus King fought valiantly, as well, with a total of 10 points. Jett Nelson and Tim DeWulf each had 5, Jaden Hunt 4 and Camden Weber 2. Weber made his first appearance in several games after being sidelined by an injury, and his play seemed a bit tentative at times.

The Tigers achieved 22 total rebounds, 6 assists and 8 steals, with only 9 turnovers in the game. Tiger teamwork has always been strong with the Tiger boys, and that is what has made them one of the top teams in the league.

OHS and ACH have now met four times over the course of this season and are tied at two and two. After winning the district championship the previous week on a very lucky tip-in at the buzzer, the Tiger boys just didn't seem to have the drive to win this one. 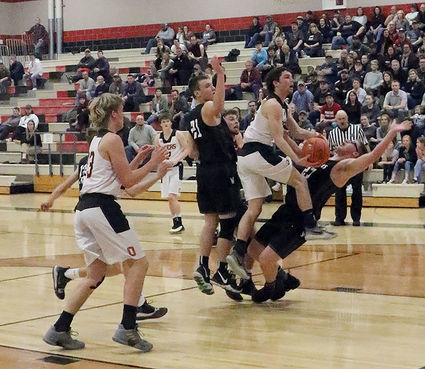 Odessa's Camden Weber (#3) and ACH's Brayton Schafer (#21), who are not only basketball rivals but also first cousins, battle under the boards in last Friday's loss to the Warriors in Cheney.

Depending too much on their shooting phenom Moffet seems to make some members of the Tiger team hesitate to take their own shots. None of Moffet's attempts from three-point range were good Friday, because he was immediately double-teamed by ACH players and had to hurry his shots. Other shooters need to fill the void.

Marcus King made another good showing against ACH, although foul trouble early in the game kept him on the bench for a while. Once back into the game, he made a standout play under the basket, twisting and turning and putting spin on the ball as it snaked its way to the backboard and then into the basket (see photo).

The Tigers' next game is against Neah Bay on Wednesday, February 27, at 5:30 p.m. at the Spokane Arena. If OHS wins the Wednesday game, they will play Sunnyside Christian (ranked #1 in the state among 1B schools) on Thursday. If they lose to Neah Bay, their season will be over.

Also on Thursday, Odessa's rival school ACH will play the winner of Wednesday's game between Garfield-Palouse and Naselle.