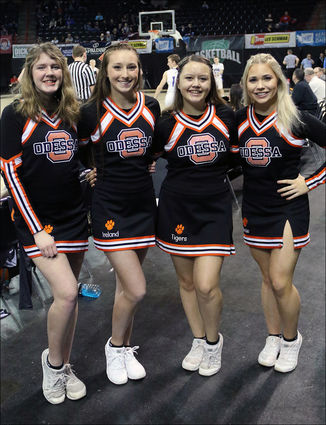 The Odessa Tigers took home a fourth-place trophy at the state B tournament in Spokane last weekend. Their regional playoff loss to Almira-Coulee-Hartline (see February 28 issue of The Odessa Record) pitted them against Neah Bay on Wednesday evening, Feb. 27.

The Tigers defeated the Red Devils, 81-73, as Ryan Moffet scored a whopping 48 points to pace the Odessa team and win for himself special recognition from the WIAA for scoring the most points in a single game at the tournament. He also nailed 13 of 15 free throws.

Marcus King added 17 points and had a solid game. The Tigers had 14 steals to the Red Devils' 7, but turned the ball over 9 times, while Neah Bay had no turnovers. In rebounding the Tigers led only slightly.

On Thursday, the Tigers took on the defending champion Knights of Sunnyside Christian in a very hard-fought loss.

The coaching staff had done their homework and knew that they had to stop Moffet from scoring whenever possible. They managed to limit him to 19 points, far below his average. Two defenders were guarding Moffet whenever he had the ball in three-point range, giving him almost no opportunities to score from outside.

Marcus King scored 15 points, getting 5 buckets and sinking 5 of 6 free throws. The team trailed by only four points at half time, but only fell further behind in the last few minutes of the game.

Tim DeWulf led the rebounding with 10.

On Friday, the Tigers were back in form, defeating the Riverside Christian Crusaders of Yakima, 70-47.

DeWulf and King each had 8 rebounds to lead the Tigers. 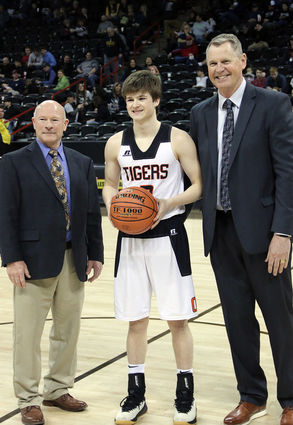 Ryan "the machine" Moffet receives an award from WIAA officials for setting a new record for most points scored in a single game during a tournament.

On Saturday morning, the Tigers faced the Oakesdale Nighthawks in a game that determined 4th and 6th places. Odessa's win, 63-45, gave them the 4th place trophy.

Moffet scored 24 points, while King and DeWulf scored 12 and 10 points, respectively. DeWulf led the rebounding with 10. It was another close game throughout the first half, but Oakesdale seemed to lose steam in the second half, while the Tigers stepped up their own game.

Sunnyside Christian went on to take the championship, their third in as many years. They defeated second-place Yakama Tribal, 54-45. Muckleshoot Tribal defeated ACH, 68-44, for 3rd and 5th places, respectively.