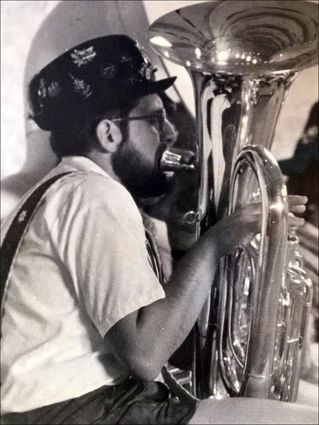 Del Kirstein plays the baritone during a performance by the Oom Pas & Mas German band.

Last week (but too late for publication), Ken and Mary Kirstein of Herscher, Ill., sponsored a window in the Old Town Hall in Odessa in memory of Delmar "Del" Kirstein. Del was the barber in Odessa for over 40 years and an avid supporter of all things musical, whether it was for the church, community or school. He helped form three bands, The Ron-Dels and The Roamers, which were small groups that played for dances in the former town hall during the 1960s, and the Oom Pas & Mas German Band, in which he played beginning in the 1970s and until his death in 2005. In the small dance bands he played bass and drums, but in the German band it was trumpet, bass and baritone.

This week's sponsor of the week is the Dale and Mary King Family of Pasco. Dale was born and raised in Odessa and graduated in 1986. He attended Washington State University where he earned his Master of Science degree in Mechanical Engineering. Dale and his wife Mary and their four sons live in the Tri-Cities area where Dale works as Director of the Project Management Office at Pacific Northwest National Laboratory. Dale, Mary and the boys are frequent visitors to Odessa where they love to hunt and visit family, says Dale's sister-in-law Terri King.