OTH window sponsors of the week 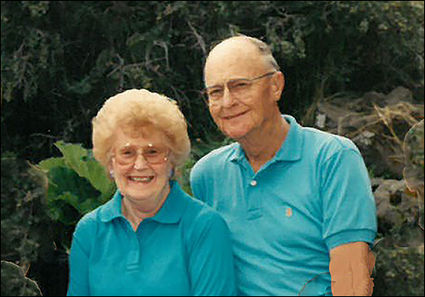 Rosie and Heinie Michaelson pictured in 1991.

This week a window for the Old Town Hall was purchased in memory of Henry and Rosie Michaelson, life-long Odessa residents. The two met when Rosie was hired as a soda fountain girl by owner Henry "Heinie" Michaelson for his Corner Drug Store. They married in 1941 and their four children, Carol Evavold, Mary Kirstein, Dean Michaelson and Margaret Praetorius, have sponsored this week's window in memory of their parents. Their parents were driving forces behind the Odessa Historical Society and museum and were also very involved in Deutschesfest. When Mt. Saint Helens blew in 1981, Heinie was Mayor of Odessa and helped coordinate the cleanup of one of Odessa's biggest natural disasters. 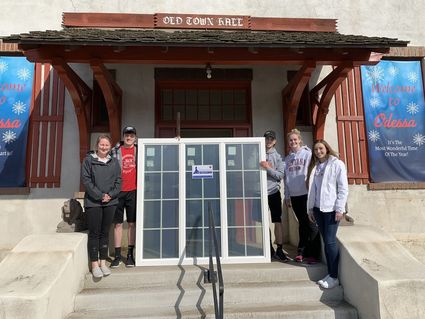 Odessa High School FBLA members display one of the new windows for the Old Town Hall that were delivered this week for installation later this spring. Caitlyn Schuh, Marcus King, Camden Weber, Maddy Wagner and Ireland Luiten are the students.

The Window Campaign has been a huge success and is almost complete. The goal is to replace all 41 windows in the Old Town Hall, and only nine more sponsors are needed to reach this goal. Dale Ramm of Ramm Hardware took delivery of the 22 upstairs windows last week, which he will install later this spring.

For anyone interested in sponsoring a window, the cost to buy and install one new window is $756. Checks can be mailed to the Old Town Hall Rejuvenation Society, c/o Faye King, 16790 King Ranch Road, Odessa, WA 99159. For more information about the project, please call Terri King at 509-988-0430.