What was the best gift you received as a child? 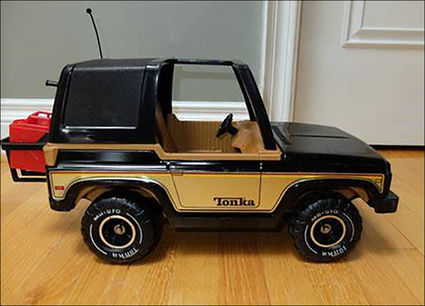 What was the best gift you remember receiving as a child? I'm not talking about obvious big-ticket gifts like a car or computer. I'm talking about a gift given to you when you were in grades 1 through 7, a gift that kept you not only physically active but also able to use your imagination.

For me, it was a Christmas gift from my parents right around the time I was in the sixth grade and 10 years old. It was the Adventure Buggy! The Mighty Off-Road Adventure Buggy, made by Tonka, was a jeep/blazer/bronco type toy, with a pressed steel body and hard plastic top that was cut to resemble a T-top, making it the perfect handle to carry it by. It sported a whip antennae and rack that held a red gas can, spare tire and jack that attached to the back of the buggy.

The four hard plastic wheels were removable and could be changed out with the spare tire in the rack, just in case you had an accidental flat. That wasn't even the best part. The best part, especially if you were a girl, was that the way the top was open, both Barbie and Ken would slip right into the driver and passenger seats, and they fit perfectly!

My brother also received an Adventure Buggy that same year, and boy did we ever have the adventures. We lived in an apartment complex in Tucson at the time, and I still remember the way the hard plastic tires sounded as we ran down the sidewalks at full speed, bent over in that way kids have when pushing a car or truck large enough to support weight, hanging on for dear life to the T-top of the buggy with Ken driving and Barbie's hair blowing in the wind. There may have been a time or three when Skipper was crammed in the back, but she didn't fit as well as Barbie and Ken so she was usually left behind.

The removable tire feature on our buggies was so well used that after awhile, always when we would be running full bore down the sidewalk, a tire would go flying off causing you to wreck your buggy and need the spare. Thinking back on it now, it's too bad we didn't have a tow truck made by Tonka, because it would have received plenty of use with the number of crashes we had.

The only other toy that might have come close to the Adventure Buggy would have been the Winnebago with slide-open top that I played on when I was in the first or second grade but only because we (my cousins and I) could sit on them and ride them down the hill of the street we lived on in Royal City.

No, even after writing this, I still have to say the Adventure Buggy was the best gift I ever received and I cannot recall one single bad memory to go along with it.