Chamber selects Person and Business of the Year 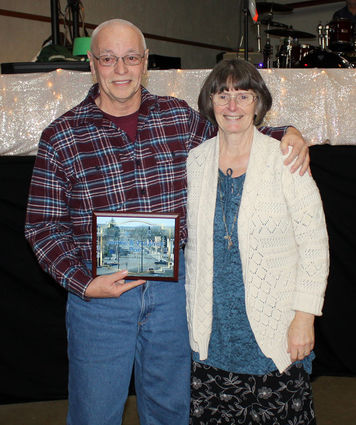 James and Vivianne Poe, were voted the Volunteers of the Year for 2018 by the membership of the Odessa Chamber of Commerce. The awards were presented at the Chamber banquet held March 16 in the community center.

At the annual banquet of the Odessa Chamber of Commerce held last Saturday evening in the community center, Master of Ceremonies Ted Bruya, the owner of Odessa Drug, called for the crowd's attention in order to award plaques to the Person of the Year and the Business of the Year as voted on by the Chamber membership.

The Persons of the Year are a married couple, James and Vivianne Poe, who have contributed a great deal of volunteer time to the various events that take place in our small town throughout the year. Although they are relative newcomers to Odessa, they have lost no time at all in meeting people, joining organizations and volunteering to help out whenever and wherever they can.

The Business of the Year plaque went to the owners of Odessa Office Equipment, Marlon and Melissa Schafer. Marlon was born and raised in Odessa, descended from some of the Volga Germans who were instrumental in settling Odessa in the early 20th Century. Melissa is a native of Harrington and has family members living there to this day. The company began by offering repairs and sales of office machines. As the Internet came into being, the company changed its focus to offering Internet services, initially for the immediate Odessa area but more recently expanding to most other parts of Lincoln County. Providing improved service, increased bandwidth, faster speeds and more memory capacity, while at the same time expanding its reach beyond Odessa, keeps the company growing and operating at full speed.

With a social hour beginning at 5:30 p.m., volunteers tended bar while the attendees staked out a table, looked over the raffle items and conversed with friends and colleagues and family members.

Chamber president Zach Schafer, manager of Rocky Coulee Brewing Company, welcomed the guests and thanked them for attending before turning the program over to emcee Bruya.

Pastor Jon Hayashi of Heritage Church in Odessa gave the invocation before the Odessa High School chapter of Future Business Leaders of America began serving a buffet-style dinner of prime rib with salad, mashed red potatoes, cooked carrots and dinner rolls, followed by either Mud Pie or cheesecake for dessert.

This year, the theme of the banquet was March Madness, and attendees were encouraged to wear the colors and logos of their favorite NCAA teams. The tables were decorated with centerpieces filled with fun items and one person from each table was able to take home the centerpiece and enjoy its contents. The person who occupied the chair that had a piece of ribbon attached to its underside was the centerpiece winner at each table. 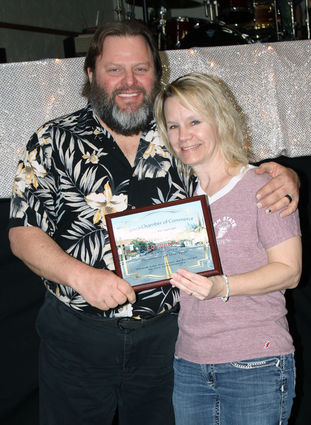 The Chamber selected Odessa Office Equipment as Business of the Year for 2018, represented by its owners, Marlon and Melissa Schafer. The awards were presented at the Chamber banquet held March 16 in the community center.

Odessa and area businesses donated prizes for a raffle in which tickets were dropped into paper bags accompanying each of the items. Those who bought tickets could therefore decide to take their chances only on items which interested them. The raffle items ranged from Cougar and Husky T-shirts to a 58-inch flat-screen TV with built-in Roku. That top prize was won by Cory and H.P. Carstensen.

A side game, which drew quite a number of participants, involved a tournament bracket on poster board listing the names of those willing to pay $5 to enter. The money from the entry fees went into a pot to be split by the Chamber of Commerce and the winner of the tournament. Schafer repeatedly shuffled a deck of cards, and each two participants in a bracket then cut the deck and showed the bottom card. Whoever showed the highest card (with aces high) won that round and moved into the next bracket, while the other person was eliminated. Megan Schlimmer was the lucky winner who edged out her opponent every time she cut the deck.

Zach Schafer chaired the short business meeting required of the Chamber membership before turning the program over to a live band called The Nerve out of Spokane. It was not long before dancers appeared on the dance floor.