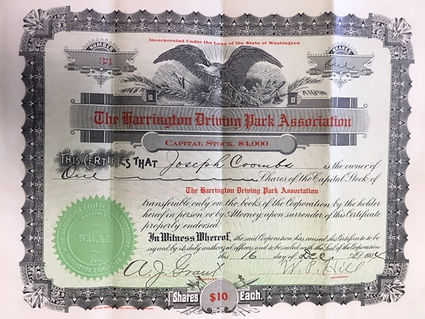 The front of a capital stock certificate dated Dec. 16, 1904, issued by the Harrington Driving Park Association.

Steve Marsh of TD&H gave a presentation pertaining to the "big picture" of monies from the Transportation Improvement Board. He commended the work of Margie Hall in working with Harrington residents to fill out income data, which, once completed, allowed Harrington to compete for financing of major projects. Due to Hall's persistence and success in getting this data, Harrington automatically qualifies for funds.

Funding for the water system, re-surfacing the water tank, structural failures, water meters, service lines, fire-fighting capabilities, as well as Dept. of Ecology funding for bad sewer lines and Dept. of Health funding for water systems were all discussed.

A committee reported to the council on the status of the McGregor building, which the city has purchased and is located on city property. The council is now trying to determine whether the property and building are greater assets to the city as a rental facility or as additional space for the maintenance department. Three interested parties have contacted the city regarding the possibility of renting the building in response to an ad the city placed in local papers. Discussion included McGowan's desire to have a new shop, since he believes the current shop has inadequate heat, an insufficient storage area and is extremely wasteful because the office area has never been physically separated from the work area.

Arguments against use of the McGregor space by the city maintenance crew is the number of times crew members would need to cross the highway, which is on a blind corner. The council voted 4-0 to continue exploring the option of leasing the property for a minimum of one year and then re-assess. A cost comparison for heat and insurance for the McGregor building and the current city shop will be gathered by committee prior to the next council meeting.

All council members seem invested in attending AWC classes and events, which have been exalted by Tipton as beneficial for each as individuals as well as for each as members of the city council. Along the same lines, Luck attended an Odessa City Council meeting to observe how other towns are making the best use of their time at council meetings. Odessa seems to rely much more on the formation of committees and that members often are placed on a committee topic for which they seem ill-suited, however, that works to the advantage of serving to aid that member through the learning curve without using the time in an actual city council meeting.

The mayoral salary which was voted on last month and raised from $214 to about $600 per month needed to be written into an ordinance and voted on in that form. Consequently, Ordinance #498 was passed by the council. As previously reported, the salary increase does not begin until the next term begins in January 2020.

An announcement was made that there will be a Town Hall meeting in Davenport on Saturday, March 23, with area legislators present, including Tom Dent and Judy Warnick.

In a recent Harrington historic item in The Odessa Record, mention was made of F.M. Lighthizer's involvement in various civic ventures, among which was the Harrington Driving Park Association. Avid reader Jim Els brought a Capital Stock Certificate for that corporation, dated Dec. 16, 1904, purchased for the sum of $10 by Joe Coombs, and signed by president W.P. Hill and secretary A.J. Grant. From the Articles of Incorporation for the Harrington Driving Club, their main purpose was "That the object of said corporation shall be to buy, build and maintain a Fair Ground of Driving Park, of the purposes of having races, Base Ball, Foot Ball, Picknicks, and other sports." Several historic photos exist showing a ball park on the south side of Hwy 28, just west of Harrington off of Main Street. Harrington is fortunate to have eagle eyes on The Record with sufficient concern for the preservation of its history as to expend the energy to share mementos. "Association Buys Park. The Harrington Track Association bought forty acres of land this week from S.E. Scott. The land lays just a half mile north from the city limits and it will make an ideal place for a track, also picnic and ball grounds, as it has living water and can be made very attractive. Improvements will be begun soon as possible, a track graded, grand stand built, etc., and it is hoped to have the track ready for use this fall. It is the purpose of the Association to incorporate and issue stock which will be done at once." (Citizen: 7-01-1904)

With such a discrepancy between the photo location of the park to the west of town and the news item indicating that it would be out north of town near the Kerr place, additional research of deeds might answer the new question.

With the snow in retreat, twelve adults attended the Senior Meals on Friday, March 15, in addition to Sue Harding, cook. The bountiful meal was corned beef and cabbage with potato and carrots, whole wheat dinner rolls, tropical fruit cup and pistachio pudding with whipped cream. Lots of after-dinner conversations were taking place. Paul Gilliland, Gordon Herron and Cherie MacClellan were discussing problems with the sewer line in a specific yard. Several individuals utilized the blood pressure unit placed in the room by Aging and Adult Care of Central Washington at Wenatchee, where there is privacy as to the results. The convenience of the blood pressure machine is appreciated by some of these seniors. Those attending were hopeful that others in the community would take advantage of availability of the Senior Meals program. 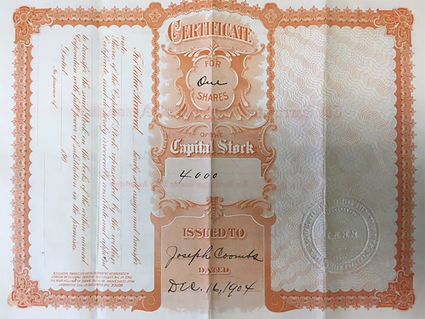 The back of a capital stock certificate dated Dec. 16, 1904, issued by the Harrington Driving Park Association.

On Friday, a pickup parked near city hall, and the driver pulled out a ladder and raised it to the Caterpillar sign over the city hall entrance. This writer failed to learn who was on the ladder but observed for a few moments the beginning process for rehabilitating the sign.

Sunday, March 24, at 3 p.m. at the St Francis of Assisi church reception hall, Victoria Rice, former Miss Harrington, will relinquish her crown to the newly selected Miss Harrington, Casey Lee. The community is encouraged to support and attend this function sponsored by the Harrington Homemakers.